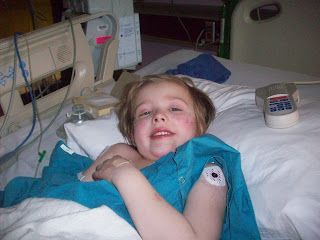 We left this morning at 5:00 and arrived at 5:30 for the 7:30 surgery. It started out rough, but then the nurses provided some “Razzle Dazzle” (as the fondly call it) and Brooke had fun blowing bubbles using a “smoke mask” (as she calls the sleeping medicine mask). I was allowed to go into the OR until she fell asleep. We named gum ball colors as she drifted off. Never gets easier walking out of the operating room and leaving your baby behind. Surgery started right around 7:30 and we were paged at noon.
Tim and I came into the OR waiting area to find Dr. B sitting on the counter and texting. Love this doc!!! He grabs a piece of paper and takes us into a private room. Tim and I glance nervously at each other. He quickly tells us she is fine. But he found some interesting things. He made an incision at the S4 and S5 vertebra. This is where the Dura Sac should be. And this is also where he should find the tether. But instead he found no CSF Flow and a bundle of nerves. He said it was very strange and he had never seen anything like it. He then made an incision at the L4 vertebra and found the Dura Sac. He was so surprised, so he called up his neurosurgeon friend. He also had never heard of anything like this. He then found the tether. It was tight and the nerves coming off were stressed. He was able to detether. He also told us that he did not want scar tissue to grow over the exposed nerves on lower spine, so he inserted gortex(sp). Apparently, scar tissue can not form over gortex. He thanked me for providing him a child that was such an unusual case. :) He also said thankfully he had a sixth sense and did not begin cutting or messing with the nerves at the end of the spine. (We like to think of that sixth sense as God!) We do know now that if and when she needs a lumbar puncture it has to be above the L4 vertebra because there is no CSF Fluid below this.
She is doing well and smiling. What a trooper! They had to draw blood and I stood and watched as 2 nurses poked her in 2 separate places and moved the needle around. Then they had to send for a plebotomist(sp). They got it on the first try. Brooke said, “I am trying to be brave and only say ouch.” Love her! She is also having poor urine output. They think it is ok but watching it. Poor thing then got sick and threw up. She looks up at me, “Mama I am sorry! I did not know it was gonna happen!” She is really trying hard to be brave. I am so proud of her!!! I am here at RMH with the boys and daddy is watching over her. I will go back in a little while. Really need this headache to go away. Had it for 2 days and it is dragging me down. Want to get back and feel my best for her. Thank you for all the prayers!!!
Posted by Melinda at 9:34 PM