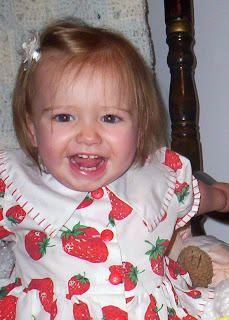 Today I learned about another little girl in our area who has Chiari.  She is a few years younger than Brooke.  There was a feature story about her in the local paper.  A very nice write up about how people are helping her.  It is always a good thing to see communities stepping up to the challenge of helping others.  I will add this little lady to my prayer list.  If her parents are like us, they want their girlie to be as pain free as possible!

One thing I am sad about is the little people know about his disease! Chiari is more prevalent than cervical cancer.  And yet we listen to those ads all over our TV's.  When I say Chiari, most people say, "What?".  The other problem is the medical community.  They do not even agree on proper treatment methods of Chiari.
So what is Brooke's story?  For those of you who do not know, Brooke started having seizures right before she turned 2.  The first one was horrifying.  A Grand Mal Seizure right on our living room floor.  It was not fever induced, and the doctors kept asking questions I could not answer. "How long was it? Where were her hands, Her eyes?  Did she look to a certain side?"  I quickly learned to pay close attention to everything.  Brooke had numerous scans.  Finally her neurologist told us he did not know why she was having seizures but she had this thing called Chiari I Malformation.  "Don't Worry about it.  It will just give her bad headaches when she is a teen." he assured me.  Don't worry??? You just told me my daughter has a brain malformation.
Just a few weeks prior I had watched an episode of Extreme Makeover.  The mother and her 3 daughters had Chiari.  I now know this woman as the amazing Julie Carter, who I have had the pleasure of meeting.
After this appointment, I went home and got on the Extreme Makeover web site.  I found Julie on there and emailed her.  I asked for direction.  She led me to my dear friend Nicole.  Nicole and her 3 children have Chiari and they are local.  Nicole guided me through site after site of information.  The best sites I have found are listed on my sites list.
At this point I found the Chiari Institute, but it was in NY!  Surely there was a local doctor who understood Chiari?  So we made an appointment with a Neurosurgeon nearby.  This visit was probably not one of my proudest moments, but he was far from knowledgeable about Chiari.  I knew more than him and he did not even examine or speak to Brooke!  We left and made our appointment in NY.  Right after I had our appointment in NY the seizures stopped!  Brooke did not have a seizure disorder, she had Chiari.  God wanted us to know this.  The seizures led us to the tests that led us to the Chiari. Chills!  Thankfully He is Way Bigger than us!
We went to see Dr. Bolognese for the first time in October, 2008.  Dr. B was amazing and his staff was awesome!  I felt like I had finally found the answers we needed.  Of course we still needed more tests, but he was certain that many of Brooke's symptoms were from a tethered spinal cord.  Brooke was supposed to have surgery on her spine in the summer of 2009.  Unfortunately, 2 weeks before we were supposed to leave, the hospital decided that there was not enough evidence of a tethered cord.  So my poor baby had to wait.  She has endured MRI's (which she is sedated for) and urodynamics tests every 6 months.  At this last visit in June, 2010 we heard what we were not expecting ...brain surgery.  See post Doctor's Orders.
As many of you know, I believe our children are gifts from God, on loan to us.  I put all my faith in this and ask God to lead me to the right doctors, knowledgeable people, and support systems.  He has never failed me.  In fact, time and again when I think that I just cant find the answers I need...SMACK.. they become completely apparent.  I do not know what this surgery holds for Brooke.  I pray a better, pain free existence. So I hand her over to the one who created her, and trust in Him.
Posted by Melinda at 10:01 PM